Environmental Issues in Serbia: A Lack of Funds and Political Will

The state of the environment in Serbia, in all of its aspects, calls for much higher investments, hence more political will – this was one of the main conclusions of the latest "Shadow Report" by the Coalition 27 which monitors and publishes its critical review concerning Serbia's progress in the preparations for negotiations on European Union membership, in the part pertaining to Chapter 27, namely the environment.

The "No-Progress Report", as it was entitled this year, was presented during a public discussion held at the Jevremovac Botanical Garden in Belgrade, with participation by Minister of Environmental Protection Goran Trivan, State Secretary at the Ministry of Environmental Protection Ivan Karić, Head of Section at the EU Delegation to Serbia Richard Masa, and representatives of 11 civil society organizations comprising the Coalition 27.

The report covers the following areas: air pollution, waste management, water pollution, nature protection, industrial pollution, chemicals management, noise and climate change. The most important common thread indicative of the disproportion between the actual needs for urgent investments and a lacking significant progress in any of the areas is inadequate financing. Therefore, yesterday's event was mainly focused on an exchange of opinions regarding insufficient collection of fees from polluters, inadequate expenditure of funds collected, lacking transparency when investing the amount that remains and, finally, lacking capacities, i.e. projects necessary to mobilize more money available from European funds and those of other international development partners.

Duška Dimović, a representative of the World Wildlife Fund’s (WWF) regional office, who presented the most important findings of the Coalition 27's report, stated that the widespread perception of environmental protection being expensive and Serbia not being able to afford the necessary investments was, in fact, a grave misconception: "We are already paying a steep price for not taking care of the environment – from medical treatment costs due to air pollution, to absence from work due to illness and loss of income; from loss of biodiversity and ecosystems which are essential to our life, to the consequences of climate change and natural catastrophes. One cannot avoid dealing with this problem in the long run. It is necessary that the Green Fund be used for strategically clear priorities, in accordance with transparent criteria”, Dimović stated and urged the Government, local self-governments, non-governmental organizations and international development partners to direct their efforts in this area with more intensity.

Minister of Environmental Protection Goran Trivan also voiced his dissatisfaction with the functioning of the Green Fund. He announced that he would conduct important talks with the new Minister of Finance so as to resolve this problem: “The Green Fund was reestablished last year; now that we’ve slowly set it in motion, it is left for the Fund to start actually operating. On the one hand, it has been operational this year already. Still, I am not satisfied with the amount of funds designated to this Fund. Hence, there will be talks with the Ministry of Finance, on a new budget draft, namely about the fact that all the money collected in Serbia from green taxes and fees should become part of the budget fund, the fund of the Ministry of Environmental Protection. Then we will have the capacity to finance a major part from our own funds, primarily the administrative tasks pertaining to Chapter 27.” 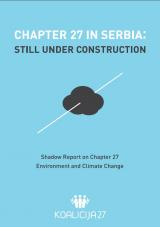 Chapter 27 in Serbia: Still under Construction 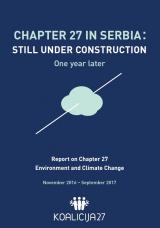 Chapter 27 in Serbia: Still under Construction, One Year Later 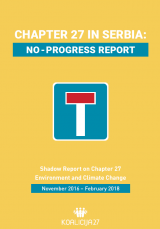 The report Chapter 27 in Serbia: No-Progress Report deals with the key events in the areas of environment and climate change (Chapter 27 in the EU accession negotiations) in the Republic of Serbia in the period from November 2017 to February 2018. The report assesses those events and makes recommendations for strengthening the process of transposition and implementation of the EU legislation covered by this chapter.