An exhibition of socialist Yugoslavia’s architecture, held at the world-renowned Museum of Modern Art (MoMA) in New York since July 15th 2018 until January 13th 2019, was the direct cause or call for us to examine our own heritage.

Spread across 1000 m², spanning  several thematic areas and monograph rooms, the complexity of Yugoslav architecture and society is on display in the heart of Manhattan. The initiative for dealing with the topic of socialist Yugoslav architecture came directly from MoMA itself. However, the exhibition is the fruit of several years’ labor by a team of experts from our region. The members of the curatorial team, along with Vladimir Kulić, the curator, took part in an international forum held between November 12th and 15th at the Center for Cultural Decontamination (CZKD) in Belgrade. The protagonists and artists from the period covered by the exhibition also joined us at CZKD’s Belgrade review of the exhibition and the various topics it has brought up.

A Concrete Utopia in Belgrade

The name for the Belgrade gathering held at CZKD was Creating a Concrete Utopia: The Architecture of Yugoslavia, 1948-1980. The name itself was a matter of some dispute in the public: is the utopia concrete, or made out of concrete? That was also one of the topics discussed at the four-day international forum. The English title of the exhibition is a deliberate play on words. On one hand, a large portion of the exhibition displays architecture made out of reinforced concrete. On the other hand, by naming it a concrete utopia, the authors are also referring to an important philosophical term coined by Ernst Bloch. This blochian utopia doesn’t follow a fixed blueprint, doesn’t rely on any unchangeable ideal model, but gains a dynamic dimension of constant creation and pursuit. For the authors, this is precisely a metaphor for one of the main characteristics of Yugoslavia itself, whose architecture is the subject of the exhibition. That is why A Concrete Utopia was presented in Belgrade.

The name of the Belgrade gathering is also a play on words. Creating a Concrete Utopia  refers on one hand to the processes that went into creating the New York exhibition, and on the other hand, to the creation of that concrete utopia referenced by the exhibition. The gathering itself, an international forum, was conceived accordingly, through four thematic days.

The first day of the international forum was named Creating a Concrete Utopia: New York, and was dedicated to the MoMA exhibition in New York, the increasing interest in post-war Yugoslav architecture, and the many topics brought up by the exhibition. The introductory discussion between the author and editor of the international forum, Ljubica Slavković and Maroje Mrduljaš, the author of the documentary TV series Betonski spavači (Concrete Slumbers), opened up many relevant topics through a conversation on Betonski spavači and Maroje’s extensive work. These topics, such as the relationship between Yugoslavia’s architecture and its society, artistic freedom and accomplishments, the culture of remembrance, and the fight to preserve the heritage of local communities and their way of life, were elaborated upon in the subsequent days.

At the CZKD pavillion, which was literally filled to the brim, Vladimir Kulić then took the curious audience through the New York exhibition. Using a series of slides, the curator expertly guided the Belgrade audience through the complex structure of the exhibition itself, as well as the topics the author considered most important. The exhibition was divided into four major thematic areas. The first area deals with the country’s modernization through post-war rebuilding and construction, wherein several topics were covered, including mass urbanization made possible by large projects such as New Belgrade, technological modernization through projects like the Belgrade Fair and the Avala Tower, as well as social modernization through buildings of the so-called Social Standard: schools, hospitals, kindergartens, museums, libraries, etc. The second major thematic area represents global networks and shows the ways in which post-war Yugoslavia engaged with the world through the Non-Aligned Movement, and the company Energoprojekt, the rebuilding of Skoplje following the 1963 earthquake, Yugoslavia’s pavilions abroad, and the tourist architecture of the Adriatic.

The central portion of the room dedicated to everyday life is occupied by the Iskra telephone, the Niko Kralj chair, and many other household objects common in Yugoslav homes at the time. The room also features exhibits of large-scale design, all the way up to the large residential areas of Split 3, Belgrade housing school, New Belgrade’s blocks (Block 23), and the Cerak Vinogradi residential area.

The final major thematic area of the exhibition deals with the complex question of identity, posed by the heterogeneous ethnic structure of the former Yugoslavia. The exhibition ends in a room dedicated to memorials and memorial complexes to the People’s Liberation War (Narodnooslobodilačka borba, NOB), which the authors see as a sort of network holding the entire Yugoslavia together, on the basis of anti-fascist struggle during the Second World War. The final room is preceded by a monograph room dedicated to the architect Bogdan Bogdanović, completely filled with this spectacular drawings and his own photographs of the memorials he designed.

Monuments to a Country which no longer exists

While tickets to the exhibition are bought from a freshly polished red kiosk, it closes with a clip from a documentary film on Jasenovac. As Vladimir says, monuments are perhaps the most spectacular material prepared for the exhibition, and they make a fitting ending for it, since they open up the topic of the dissolution of Yugoslavia: “Out of all types of construction, monuments perhaps suffered the most from the dissolution, so in a way, they are also monuments to a country which no longer exists.”

After Kulić had finished his tour through the exhibition, the first day of the CZKD international forum was drawn to a close with a discussion among the authors of the exhibition, and those of the project preceding it, called Incomplete Modernizations. The curator, Vladimir Kulić and curatorial advisor Ana Kac told the public more about the exhibition itself, and the audience’s reactions to it, while Maroje Mrduljaš and Jelica Jovanović filled in the picture by going through the problems encountered while preparing the exhibition, where the question of gathering and preserving the material. i.e. the archive, and the privatization of institutions played a large role.

The second day of the international forum was named Creating a Concrete Utopia: Yugoslavia. Six members of the curatorial team presented their expertise on the topic of post-war Yugoslav architecture, with which they contributed to preparing the exhibition: from the rebuilding of post-war Skoplje to the question of identity, the country’s urbanization, and its highly developed architecture. This was followed by a general discussion.

While the first three days of the gathering were spent finding out more about the creation of A Concrete Utopia from the authors and associates of the exhibition, the second part of the gathering was focused on the experience of the artists and architects from the time of socialist Yugoslavia. Thus, the third day of the gathering, entitled In the First Person, consisted of talks with architect-protagonists who were themselves the creators of a concrete utopia. Milenija Markušić and Dragoljub Bakić are architects who, in professional teams with their spouses, created distinguished projects in socialist Yugoslavia (Block 61-63, the residential area Cerak Vinogradi/Hala Pionir, the residential area of Višnjička Banja), but across the world as well, so the CZKD audience had the chance to speak to them directly and hear their immediate experiences. The topics from the open round table discussion with the architect-protagonists were completed by screening an episode of the TV-series Betonski spavači, which brilliantly illuminates the post-war architecture of Yugoslavia from many points of view, and explores its architecture as well as its place in society.

The fourth and final day of the forum was entirely dedicated to the topic we called Missing Knowledge: The People’s Liberation War Memorials. The planned talk with the sculptor, professor Miodrag Živković did not take place for justified reasons. Instead, Sanja Horvatinčič held a lecture, and then, together with Branislav Dimitrijević, speaking with the author of the gathering and the audience itself, discussed the many pressing topics of monumental heritage: the questions of its representation, production mechanisms, artistic value, as well as the problem of revisionism.

One of the more important products of the gathering is the website presented over the course of the international forum: Arhiva modernizma (The Archive of Modernism). It is a digital repository, which is currently under construction, collecting and making available to a wider audience a large portion of the materials collected in Belgrade for the exhibition in New York, as well as materials used in the authors’ earlier studies. This valuable resource for all scholars of socialist Yugoslav architecture, and the wider cultural public, was made possible with the support of the Heinrich Bӧll Foundation’s Belgrade Office, as well as Do.co.mo.mo Serbia.

Tags
modernism
architecture of Yugoslavia
monuments
utopia
urban planning
human-centered cities
This post is from the category:
Urban Development
.
This post is licensed under:
All rights reserved.
. 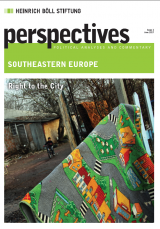 Perspectives SEE - Right to the City #3

It seems as though the term citizen does not need a specific explanation. It is an inhabitant of a certain country or a city, a person with legally recognized citizenship, who pays taxes and fulfills their obligations to the community, and enjoys certain rights in return. But how often is that really the case? How many citizens in the world can say that they are true citizens according to this definition? Given the current global situation, not many. In this issue of “Perspectives”, our focus is on citizens and cities in the Western Balkans.

A hard copy of this issue you can order from our Belgrade office.